Manaslu (8,163m), the world’s eighth highest peak and Its base camp, situated 40kms from Annapurna in west-central Nepal lies at the edge of one of the most out-of-the-way valleys in the Nepal. Literally Manaslu means “Mountain of the Spirit’. Also, it provides an option to Cho Oyu for those who want to climb a more assorted and difficult 8,000m.

Normally four camps are set up during the ascent to the summit. There are a few stretches of steep climbing and crevasses from Manaslu  Base Camp I to Camp II and there is some climbing on slippery snow from Camp II to Camp III.  Avalanches are a possibility from Camp III to Camp IV. Talking about the attractive views, you will observe wonderful views of Himalchuli (7893m), Manaslu (8163m), Ganesh Himal, Ngadi Chuli (7879m) and other beautiful peaks; you will also mark stunning varied landscape and diversity in plants and wildlife.

During Manaslu Base Camp Trek you will see different people like- Gurungs, a Tibeto-Burman people who follow Buddhism with influences of Hinduism live in this region. In low region there are many other castes of peoples like Brahmans, Chhetries, Newars, Ghales, Gurungs, and Tamangs.

Day 01: Arrival in Kathmandu, Welcome and transfer to Hotel.

Our airport representative will be waiting outside the airport terminal a few metres from the exit door. Please check your name at play card. He will bring you to hotel in kathmandu. Then drive from the airport to the hotel.

In the morning we explore Kathmandu on an organised sightseeing tour. We visit Bodhnath Stupa, one of the biggest Buddhist shrines in the world, where we observe Buddhist monks in prayer in the monasteries surrounding the stupa. We also visit Pashupatinath, the most famous Hindu temple in the country, located on the banks of the holy Bagmati River. Here we see Hindu holy men (sadhus) meditating, pilgrims bathing and occasionally funeral pyres burning on the ghats. The rest of our time in Kathmandu is free for further sightseeing and exploration. In the late afternoon you will be issued with your Trek Pack and departure information for the next morning.

Our Trekking staff will come to your Hotel early in the morning at 7.00 am to pick you up, from there we have an 8 hour driving journey to Arughat. From Kathmandu to Dhading Bensi for 3.30 hours is comfortable drive but from there to Soti Khola the road is dirt road.

The trail descends slowly until you climb again to mountain ridge to Almara. Pass the forest trail to arrive at Riden Gaon. The valley here cuts into another side of the river to enter Budhi Gandaki. At Lambesi, the trail follows down to the sandy river bed of Budhi Gandaki. Camp tonight at Machha River. O/N Tea House.

After crossing Machha River and Khrola besi, there is a hot spring called "Tatopani". The trail follows forested area after this toward Dovan. Below Dovan, there is a huge rapid at Budhi Gandaki. As the elevation increases, the rapids and the scenery undergoes a complete transformation. At Jagat, there is a police check-post where your trekking permit will be checked.

The village of Deng is home to stunning views of the Himalayas and provides a serene atmosphere for anyone willing to get lost in nature. To reach Dyang, we initially climb to Salleri and then descend to Sirdibas. We follow the upstream trail, and en route we cross villages like Philim, Ekle Bhatti, and we traverse through millet fields as well. As you trek further, the landscape changes from rugged to grassy land slopes. After crossing the bamboo forests and Deng Khola, we reach Deng.

After walking beyond Deng, we need to cross the Budhi Gandaki and climb Rana. From the bridge, we do a bit of climbing and join a trail from Bhi then head west. The trail passes through forests and from there we turn towards a corner that leads to Gyap. Ghap is famous for its Mani stones, and it provides a surreal view of the mountains that lie ahead.

Soon after leaving Namrung we will arrive at Lihi where we will have fine views of Ganesh Himal. This village has a lot of chhortens, mani walls and barley fields. We will continue towards Samagaon following Sho, Lho and Shyala villages.

This is a beautiful day with several viewpoints offering stunning views of various Himalayan peaks such as Manaslu, Himalchuli and Peak 29. We will also have opportunity to visit Rimbung Gomba (Lho Monastery).

We have a short day ahead. Trek from Samagaon to Samdo takes about 3 to 4 hours. We will follow the the Budi Gandaki river. On a lucky day we will also have an opportunity to see Himalayan Blue Sheep.  The trail is comparatively easy and wide. Continuing through the left and right of the river eventually we will reach Samdo for overnight stay.

Samdo is meeting place of three different surrounding valleys and situated behind a ridge specially known for yak herding. We will spend another night in Samdo for acclimatization. We can hike up to Gya La which is a trending pass with Tibet. This place offers excellent views of Simrang Himal, Hiunchuli Peak, Ngadi Himal, Larkye Peak, Cheo and Kang Guru Himal.

Before we start our climbing we will do a gentle descent to the river. We will be passing along a glacier followed by a beautiful gorge. Continuing through several Mani walls we will be reaching Larke Phedi for an overnight stay.  Larke Phedi has only one lodge for the basic accommodation of the trekkers. This place is also known as Larke Base Camp.

This is a challenging day. We will start early in the morning and start the gentle climbing to the ridge, a very short descent to a small lake and then make the final ascent to the Larke Pass. The last section of the pass is slightly steeper.  Soon after reaching the summit of the pass we will stop awhile for taking some photographs before descending to Bhimthang. We will have gorgeous views of several Himalayas including Manaslu Peak, Himlung Himal, Annapurna II, Cheo Himal and Kanguru Himal.

Descending from Tilje we will reach the Marshyang valley and meet the popular Annapurna Circuit Trek. Chamje is popular stop place on the Annapurna circuit route having several lodges available for meals and accommodation.

We will drive through the rugged dirt road to Besisahar and then eventually follow the paved road to Kathmandu. It's a beautiful countryside drive that marks the end of our unforgettable Manaslu Circuit Trekking. Relax and rest in the hotel, have a good shower and try a good cuisine in a good restaurant of Kathmandu before making the preparation for the departure.

Free until airport reporting time; either walk around market or do some shopping. After that you will transfered to airport to connect your flight to home. 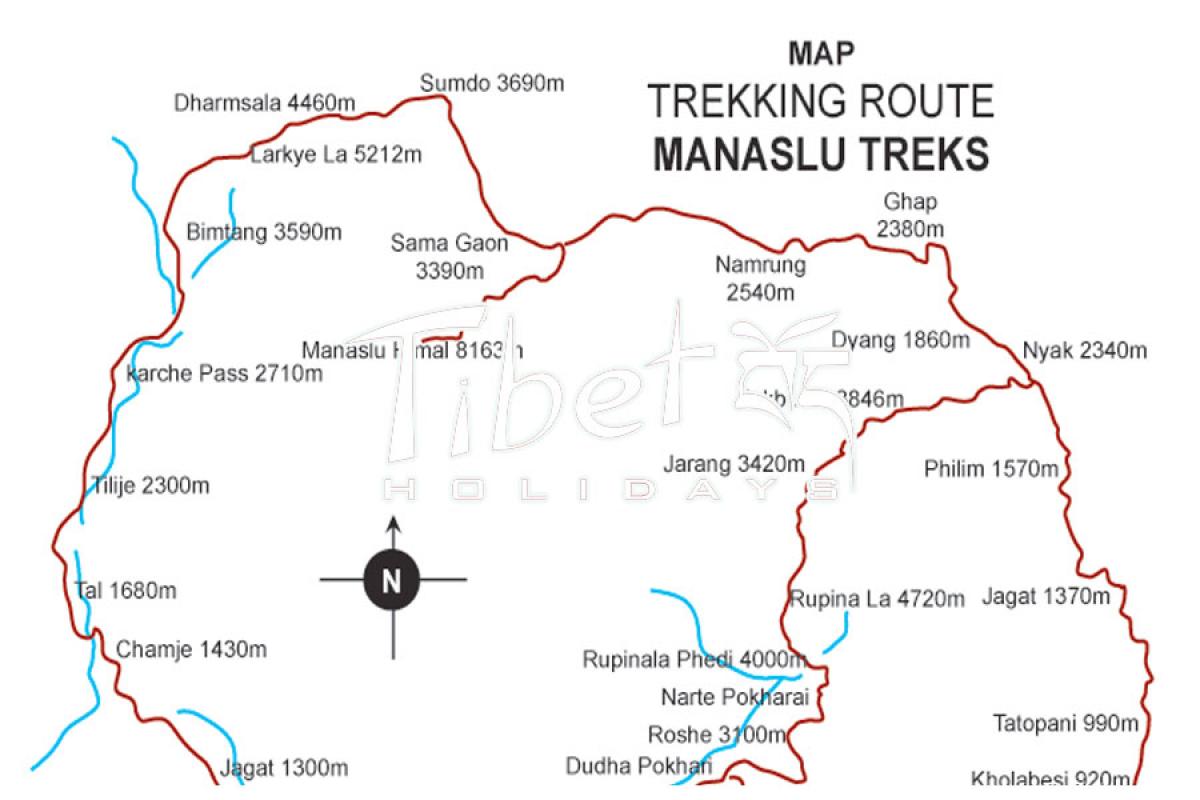 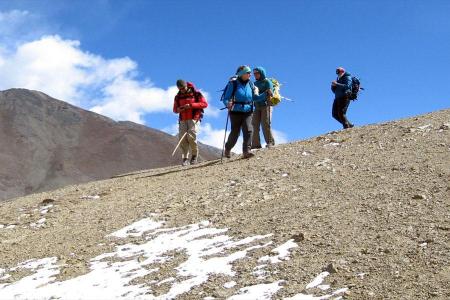 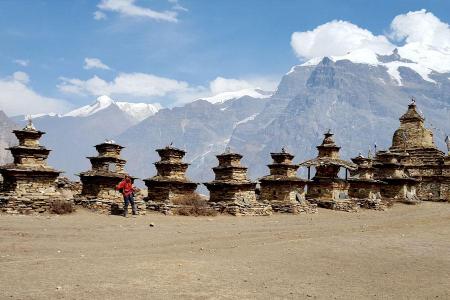 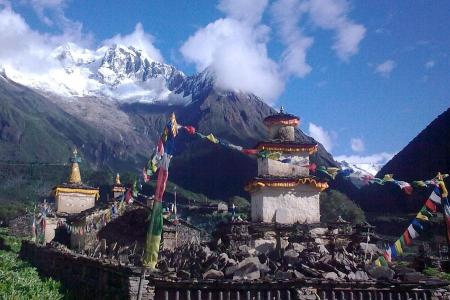