Guge Kingdom Tour
Tsamda (Zada / Tsada) county is the current name for the region which once was known as the Guge kingdom. It extends along the banks of the upper Sutlej from Khyunglung, southwest of Montser, as far as the Indian border, where the river flows into Kinnaur below the Sibkyi La pass. The valley of the Rashok Tsangpo, which gives access to Southern Ladakh and Spiti also lies within Tsamda, as does the valley of the Gyaza Kar-chu, through which the Uttarakashi district of Uttar Pradesh can be reached. The county capital is located at Toling, 180 km from Senge Khabab (via Namru), and 443 km from Purang. The new county name, Tsamda, is a contraction of Tsa (parang) and Da(wa-dzong), which are two of the most important sites within the upper Sutlej valley. The Tsamda area is characterized by the striking complex of canyons cutting through the red sandstone composite of what was once an ocean floor, all descending into the upper Sutlej River. For much of the year these canyon tributaries are dry, only becoming impassable or hazaradous in the monsoon. Those south of the Sutlej, such as the Manam Tsangpo, Dapa-chu, and Tophu-chu, rise in the Himalayas near the Indian border, which is heavily patrolled. The north is bounded by the Gar Tsangpo valley and southern slopes of the Gangtise Range.

Garuda Valley (English name) or Khyunglung (Tibetan name) is an ancient complex of living caves and meditation caves set in the mountains on the north bank of the Sutlej River. (Sutlej River is the holy river which starts from Mount Kailash, Sutlej River in Tibet is called Langqen Zangbo, meaning “Elephant Fountain”). So the Garuda valley, you can find it about 35 km west of the Tirthapuri hotsprings and Tirthapuri gompa (monastery), which is nearby small town of Moincer (Menshi) in the modern Tibet prefecture of Ali/Ngari in the Tibet autonomous region of China. And there are more ancient ruins on the tops of the mountains above the Bon monastery of Gurigyam which are about 30 minutes road from Tirthapuri.

Our representative will be at airport waiting to welcome you in Nepal and then transfer to the booked hotel. And evening trip briefing program will be commenced.

Today we have half day sightseeing of Kathmandu valley. And evening a short briefing of your trip and Trip preparation.

Today the journey starts for Kailash starting from 5 AM in the morning, Breakfast will be packed from the hotel as we need get immigration formalities on time at the border and also we have a bit rough and tough way to get border on the hillside driving in Nepal side. Once we reached at the border our representative will help to pass through immigration both Nepal and China side. Then further further 60km drive to Kyirong will be commenced.

Today we have one full day at Kyirong valley, it is a small local town. Today we will stay one more day here for acclimatization to adjust your body to the elevation for comfortable journey towar Kailash.

Today we will drive to Paryang crossing Saga town, We have an option whether we stay at Saga which is 110km from Kyirong or we drive further for 340km to Paryang. It is the best option to drive to Paryang as we could be on time next day at Manasarover arround mid day.

Today we will drive to Mansarover crossing Mayumla pass. And today we have enough time to have Havan and Holy deep at the Lake etc.

After 2.5 hrs trekking from Dzutulphuk, our vehicle will meet at Mani wall then we will drive to Darchen. After lunch we will drive to Tirthapuri. In Thirthapuri natural hotspring bath can be taken. Acording to Tibetan belief once you did Kailash parikrama circumambulation, you must need to go to Tirthapuri to have holy bath at Tirthapuri hotspring which wash away your sin of a lifetime.

Today one of the mesmerising drive toward Guge Kingdome is one of the dream for every body. It is 400km from Tirthapuri which takes 7 hours. You could explore fantastic views of Guge Castle which is one of the historic icon in the region dating back in 10th century. Historically rich Guge and its old monastery and monastic caves are the mejor atraction in the region.

Today you are traveling and exploring another very important place The Gurugyam Monastery, It is the first Bon monastery in the region, founded in 7th century which means at the begining of Buddism. Sarounding the Khyunglung Valley is dominated by caves and dwells.

This is another day to explore extensively the region or have some meditation or practice Buddhism in the ancient caves including having fantastic view of Khyunglung valley and its river a side.

Today we will return back to Saga with lost of good memories of western Tibet.

Day 16: Drive back to Kathmandu

Way back to Kathmandu with immigration formalities at the border aftr that drive toward Kathmandu.

Day 17: Free until airport time and drop to airport for final departure.

Today you have free time until airport time for shopping or other personal purpose. And drive to airport for final departure to Home. 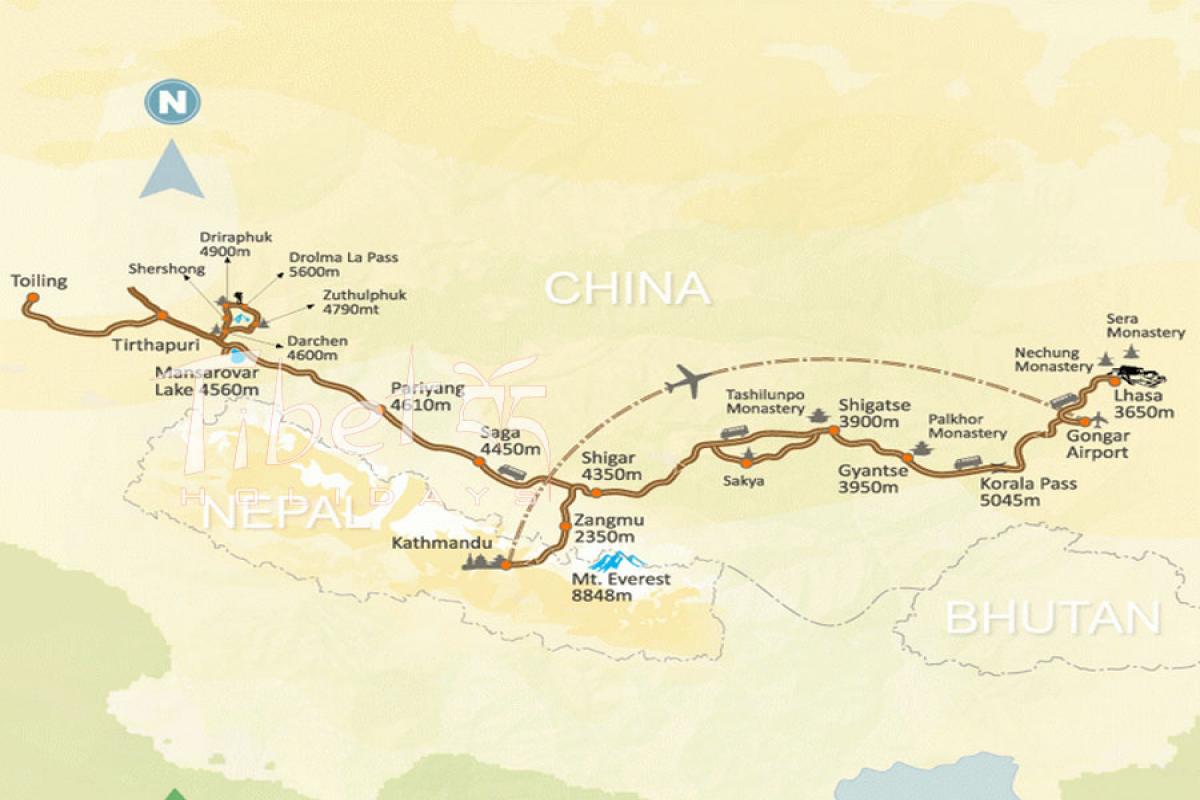